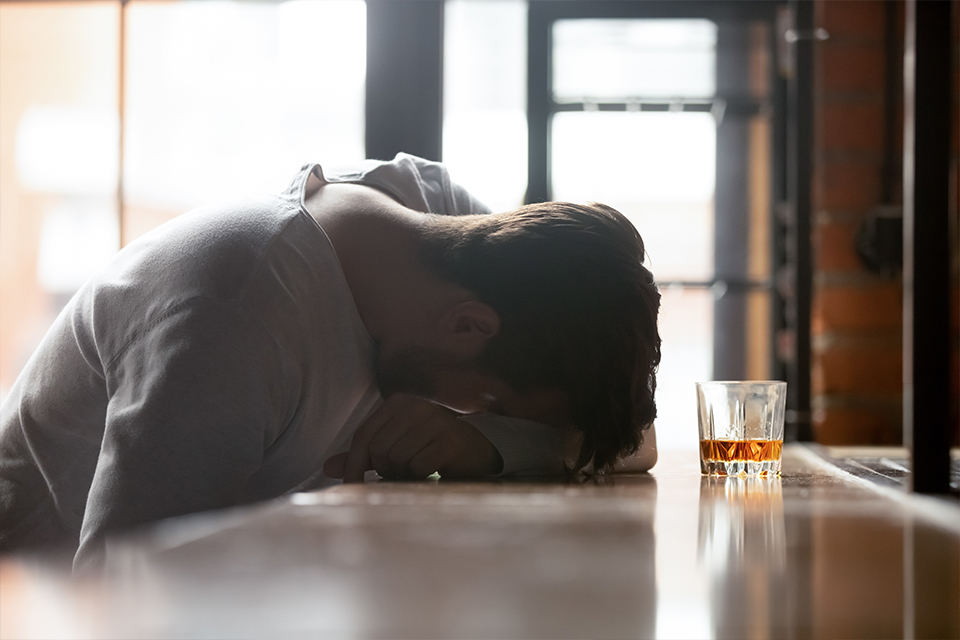 Drinking Too Much Alcohol

According to the National Survey of Drug Use and Health, about 21.5 million adult Americans battle with substance use disorder. About 80% of those who are struggling with substance abuse disorder are abusing alcohol. Most don’t even see it as a problem, as alcohol use in America has been normalized and is socially acceptable. Risky alcohol use behavior is considered anything over 14 drinks per week for men, and over 7 drinks per week for women, according to the NIAAA (National Institute on Alcohol Abuse and Alcoholism).

Those who are near or over this amount don’t see it as a problem and tend to be in general denial about their over usage, its health implications, and their own addiction or dependency onset. You see, two-thirds of the adult population in the U.S. drinks alcohol on a regular basis. Twenty-five percent of the U.S. population binge drinks (drinking more than 4 to 5 drinks in a 2-hour period). Five percent of the American population has Alcohol Use Disorder according to the Mayo Clinic.

That five percent generally does see the social consequences and the legal consequences of their alcohol use. Alcoholic behavior isn’t socially acceptable, and it does interfere with an individual’s life, social status, work, sleep, health, and often their freedom in the case of drunk driving, disorderly conduct, fighting, or abusive behavior which often is a result of too much drinking.

Why Many Alcoholics Don’t Realize They Have a Dependency Problem

Some folks may not see or even be aware of their alcohol problem, as they never really get drunk. For those who gradually increase their consumption, their bodies build up a tolerance, so they never appear to have a problem on the outside. Yet, if they don’t have a drink every day, they really don’t feel good and can’t function at optimum. This is a sure sign of dependency. Now mind you, these are fully functioning people, you’d never even realize it, and often, nor do they.

Since they have a drink or two or three every day, they function fine on the outside and never have to deal with full-scale withdrawal symptoms. Of course, if they don’t get their drink, they may feel sick, become irritable, and have trouble sleeping. Take it away for a few days and things take a quick turn for the worse, as they may deal with withdrawal symptoms.

A common new trend is to mix energy drinks or coffee drinks with alcohol. This becomes a real problem because it is possible to drink large quantities of alcohol that you couldn’t normally consume, as you would have passed out by then, but the caffeine keeps you going. For the party-going young person, this might seem like a match made in heaven, but it’s more like a match set to dried grass starting a wildfire that can’t be stopped.

Generally speaking, the caffeine will wear off long before the alcohol does, as the alcohol takes the body longer to deal with it. By this time the binge drinker has so much alcohol in their system that it overwhelms them. This is very dangerous and should always be avoided as it has led to many deaths and horrific auto accidents.

There are many known health issues that arise from drinking too much. Alcohol is a neurotoxin and a mild-poison to the body. A common health problem associated with excessive or over drinking is Cirrhosis of the liver. In fact, there has been a 65% increase in Cirrhosis deaths due to alcohol consumption in the U.S. (cite: 1).

Some common health issues with long-term excessive alcohol use include; high-blood pressure, heart disease, stroke, and cancer. The risk to specific types of cancers is well-documented, these cancers include; breast, mouth, throat, liver, and colon cancer. When it comes to your brain, alcohol can do a number on you causing memory problems, dementia, and early onset Alzheimer’s. The common psychological problems are depression and anxiety (cite 2).

You also have an extremely high risk of becoming dependent on alcohol to function normally. Once addicted to alcohol you will be subjected to a whole host of other challenging health issues, none of which is fun to think about. If you are already there, it’s probably time to get some help as soon as possible. Don’t wait, over 88,000 alcohol related deaths occur each year in the United States (cite: 3).

Unconvinced You Have a Drinking Problem?

There is an easy way to prove to yourself that you don’t have a drinking problem. Simply take 2-months off from your drinking and don’t drink any alcoholic beverages during that time. If you have no withdrawal symptoms or any pressing urge to have a drink, then you are most likely fine. If you just can’t do it, don’t be surprised, most people who have alcohol use disorder don’t realize it either.

Do you have a family member who is in denial, yet you can readily see all the signs pointing toward alcoholism? Have you come to the realization that you can’t help them, and they won’t seek help themselves? How about you? Where are you with your alcohol consumption? Need help? It’s okay to ask for help before it gets any worse. The damage to your health will only progress if you keep drinking.

We are always here to help you or a loved one. Please give us a call. We know what to do, let us help you get this right the first time. At LifeSync Malibu we are ready to serve.