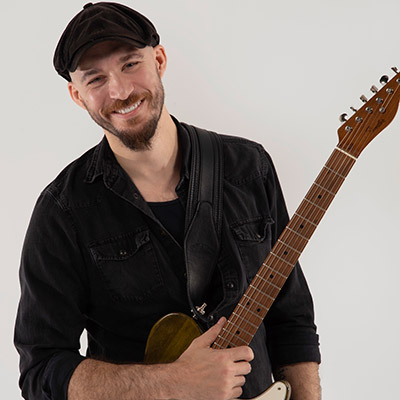 Matt Bradford quit playing piano in the fourth grade because he wanted to play guitar. At 16, he bought himself a guitar; playing it became his life’s passion. After high school, Matt attended the Musician’s Institute in Los Angeles. He has worked in studios and been a studio musician for major label artists with Sony and Universal. He toured nationally with artists like Grizfolk and Sam Morrow. His last band, Adorable Addicts, broke up in 2010. That’s when he hit the road as a singer/songwriter in support of his four solo albums. He was on the road until late 2018, when he realized that touring was no longer the dream. A friend suggested Rock to Recovery.

Though he had tried to get sober on his own, Matt was unable to stay clean until he went to a 12-step meeting. After two years of self-will, he heard in the meeting that he had a problem. Finally, he had the missing piece. He hasn’t taken a drink or drug since that day in 2013. Matt now loves his work because he gets to play music without taking himself too seriously. He also enjoys watching people who are struggling, open up and embrace their recovery. The feeling of connection he has in those moments is what the work is all about.

Click to Call
Request a Call Back for Additional Help